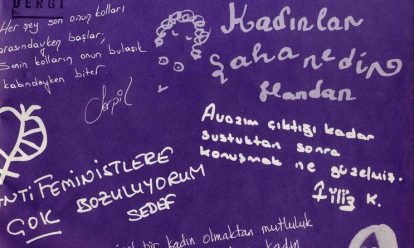 Summary:
The periodical called “Feminist” is published for the first time in 1987. The Feminist is also the first periodical in which feminist theory and practice is written in popular language. It is not an academic periodical, although the fundamental issues are brought to the feminist agenda. Topics discussed are: sexual violence, battering of women, patriarcy, women images, lesbian relations, womens’ protests, womens’ liberation. The magazine published the news of womens’ actions, protest actions, activities within the feminist movement, such as the campaing against battering of women, the protests, festivals. On the other hand the theoritical foundations of these actions and news are described in a popular style.

NANE Women’s Rights Association is dedicated to ending the human rights violations and the threat of violence against women.