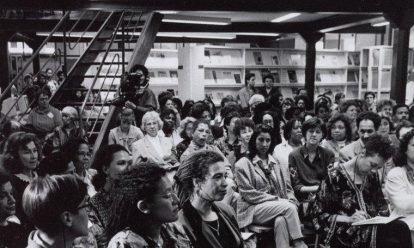 The well-known American feminist Angela Davis visited the Netherlands in 1995. She had been invited by the International Information Center and Archives for the Women’s movement (IIAV) in Amsterdam, (now Atria) to open an exhibition on black, migrant and refugee women.

The exhibition Onderbelicht, zwarte, migranten- en vluchtelingenvrouwen in Nederland, informatie uitwisseling in perspectief (Underexposed: black, migrant and refugee women in the Netherlands) was on display from 1995 up until March 8th 1996 at the IIAV. The opening speech of Angela Davis Every American has a migrant background and the texts of the lectures held around the exhibition were published in 1996.

The Onderbelicht (underexposed) project focussed on the representations of black, migrant and refugee women in the collection, as well as the gaps left in the collection. After researching how these resources could be found and accessed, the keyword list was revised. Besides adjusting the metadata and keywords, the acquisition policy itself was scrutinised, resulting in the expansion of numerous resources and the addition of several new archives. Examples of these acquisitions include the archives on Anne Krul, Hellen Felter, Zami and Project AISA.

The conclusions of this multiannual project have been implemented in the general policy and work process.