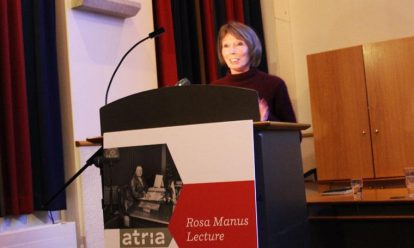 Rosa Manus (1881–1942) played an important role in the women’s suffrage movement and the peace movement. As a tribute to Rosa Manus and the significance of her work, Atria initiated the Rosa Manus Lecture series in 2016. With the annual lecture Atria wishes to provide a critical and internationally oriented focus on academic developments that are relevant to women’s and gender history.

In 2018 the Rosa Manus Lecture was delivered by Maxine Molyneux, professor of Sociology and former Director of the Institute of the Americas at University College London. Her lecture on feminist activist struggles in Latin America was titled ‘Latin American Feminism: A new Wave?‘

Atria’s information specialist Marianne Boere was present during the lecture and shares her impressions.

Second wave feminists grew up with the idea that the world was changing and that change was possible. The world today looks different. The human rights movement is under attack from conservative forces, political regimes and nationalism. In some parts of the world patriarchy seems to become a standard again. The women’s movement has achieved  a lot, but still there is gender inequality, notably visible in laws curtailing abortion and ongoing violence against women.

Women’s movements and women all over the world move in different directions. They engage with different targets. That is why networks and dialogues are important.

What makes a woman a feminist?

Dialogues between different groups of feminists are also important. Molineux emphasizes that an intergenerational dialogue can be seen as an act of celebration. Not only can we learn from each other, women from different generations can also exchange ideas and experiences. What distinguished a woman in the early 20th century or in the 1970s as a feminist? What did she think? What did she teach her daughters? In what way does she differ from women from this generation and future generations? What was silencend then and what is silenced now? Feminism today faces new challenges and new politics.

Feminist generations in the archives

In a way, generations are also reflected in an archive and a library. A women’s archive commemorates generations of feminists and generations of women before us. History and memory are what we are made of. When we know the classic texts of feminism, like those of Simone de Beauvoir, Mary Wollstonecraft and Sheila Rowbotham, we can actively use them with an eye to the future.

Only by archiving documents on  and of women and women’s organisations we can study their lives and write women’s history.

Memory is a dialogue. Memory is power. From its first beginnings feminism is an equal rights movement. It was set against patriarchy. Feminists demanded suffrage, greater autonomy for women, property rights, education, employment. Women’s movements all over the world demanded socio economic rights. Nowadays feminist activism looks different. But we should realise that we stand on the shoulders of our foremothers and that history and memory are important. Histories are of course always incomplete. They depend on the availability of archives and sources.

History depends on women that preserve the memory of their work. Feminists often forget to donate their archives, their photo’s, their diaries to a women’s archive. And yet that is the way women’s collections and women’s history are built.

Feminist movements today make use of new forms of communication such as social media. New technologies enable fast communication and different ways of activism. Videos, podcasts and websites can be made cheaply and material can be made available to a wide audience both nationally and internationally. Media like this can literally give history a voice. It is a challenge for both feminists and libraries to preserve this heritage from the women’s movement for future generations.

At first sight, crises and disasters do not seem to distinguish between people. Yet, they have different effects on different groups in our society. In the case of the Covid-19 epidemic, currently more men than women are dying from the virus. It is important to further research this fact. This also immediately points out why […]