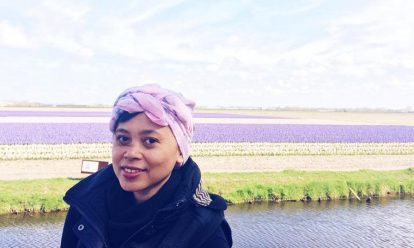 It’s been a decade since I’m working as a journalist in the biggest muslim community in the world, Indonesia. I covered so many issues, namely, women issues, terrorism, radicalism, LGBT issues (Lesbian, Gay, Bisexual, and Transgender), corruption, human rights, etc. While covering, I have so many battles in my head for some critical issues, especially related to my religion.

For example, in 2016, Indonesia experienced gay panic. The crackdown happened after the Support Group and Resource Center on Sexuality Studies at the University of Indonesia (SGRC-UI) was accused of being a community for lesbian, gay, bisexual and transgender people. After interviewing SGRC, I wrote why I support LGBT people and why LGBT is not a national threat.

I never thought that my writing would become such a huge problem for the common reader, especially the conservative one. They were questioning my standing on religion: I’m a hijaber, but I’m supporting LGBT people, that’s confusing for Indonesians. I received so many threats for this statement from hardliners who accused me to be against the Islam values. Because in our belief, that have been taught to me since I was just a kid, LGBT is haram in Islam. But, I have a lot of good LGBT friends, it makes me questioning: do we have to hate LGBT? Is true religion about humanity? Can a muslim be tolerant towards LGBT people?

It’s the same when I have to cover women issues. For example when we wrote a story to criticize the misogynic reporting on rape cases. Society usually blames women for wearing short pants or tank tops, they say it will attract the rapist. “That’s why it’s better to cover yourself with muslim hijab, it is more safe,” my religious conservative colleagues said. Of course as a journalist who believes that I have to be against this mainsplaining, this is not right. Why women have to cover to feel safe instead of saying that crime is a crime, and it can happen to anyone, wearing a hijab or not.

For the people in the West, maybe this question can be answered a little bit easier. But for Indonesian people who have a very strong background of religious family, I can’t answer this in one day. It takes a year for me to think about it. Because I want to be a muslim, feminist, and journalist at the same time.

On my way to answer this question, I met some people that helped me a lot. I joined discussions with the Feminist Discussion Group, a new community on the rise in Jakarta. A publication that fights for women’s rights, Magdalene, also helped me a lot. I have to thank alternative publications such as Magdalene to open up the discussion. I continue to learn about the issues, from LGBT issues to how to report and be sensitive with women’s issues.

In the middle of March, I had a chance to fly to Amsterdam to learn more at Atria. It was my first time learning in a Institute on gender equality and women’s history, thanks to Professor Saskia Wieringa (University of Amsterdam) who facilitated me. At Atria I read some books that I think will help me to find out how to cover these issues.

And it’s maybe my predestination to come to Amsterdam, because I also could attend the rare conversation between Amina Wadud and Saskia Wieringa on 12th of May. American born and raised professor Amina Wadud was the first woman to lead an Islamic prayer in the Netherlands, and Saskia is a LGBT professor of gender and women’s same-sex relations crossculturally. I think both sources are important to me. Amina represents a muslim woman who wants equal rights, and Saskia represents a muslim LGBT. I learned a lot from both sources. How the very strong Amina answered Saskia about the language of Arabic in Quran, which is also my question. Arabic itself has a problem with mysoginic diction. Amina answered Saskia about these boundaries, “God is metalingual and it is possible to communicate with God in nonlinguistic terms.” I agree with her, why put so many boundaries to believe in God. Because “Allah is without boundaries, so others or yourself cannot put boundaries on us.”

After contemplation, I decided that I can be a muslim, feminist, and journalist. I think I rather like to call myself that I’m culturally a Javanese muslim, I have faith in god, and I believe that women and men should be equal in many ways.

I have a dream

After coming back home from The Netherlands, I’m excited to open the discussion with the other journalists here, especially with the senior ones who have an access to influence the editor in the newsroom. I have a dream: One day I can set up a meeting between a journalist, a feminist, and of course a religious leader, to talk about our new perspective on Islam, feminism and other controversial issues.

Febriana Firdaus is a freelance journalist in Jakarta. She is a hiiabers journalist who writes about women issues, LGBT issues and other issues.

At first sight, crises and disasters do not seem to distinguish between people. Yet, they have different effects on different groups in our society. In the case of the Covid-19 epidemic, currently more men than women are dying from the virus. It is important to further research this fact. This also immediately points out why […]