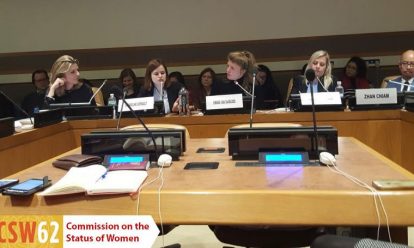 Rural women and their empowerment to achieve gender equality is the central theme of the 2018 annual meeting of the UN Commission on the Status of Women (CSW) in New York (http://www.unwomen.org/en/digital-library/publications/2017/8/un-women-strategic-plan-2018-2021).
While reading the Secretary Generals preparatory report on the subject (http://undocs.org/E/CN.6/2018/3), the enormity of the task to address women’s position across the globe was brought home.
Think of issues like:

​These take vastly different shapes and form for women let’s say in India, Columbia or rural areas in the Netherlands, or simply within Europe. If anything, the annual CSW meeting brings home the concept of intersectionality. Women worldwide are positioned through the very different ways social markers in their lives play out: beyond sex, there is age, race, social class, level of education, sexual preference, gender identity and yes: geo-political position too.

Without minimizing  the crucial meaning of the diversities this brings about, it is the universality of the concept of human rights that drives the UN CSW in its efforts to pursue the realization of the right to gender equality. Despite the challenges and obstacles to cross the bridges of difference, it is impressive to see that  an organization like the UN uniquely succeeds in forging global connections between women – and a few men – from all colors, races, walks of life, young and old, dressed up in infinite styles.

Some in the room chuckled. At the same time this response ecxemplified a larger and less innocent development at this years’ CSW:  the gender backlash, often with religious underpinnings. It is gaining strength through the work of faith based non-governmental organisations. At the annual CSW meetings they argue for the past years – with increasing force – that the notion of gender is an ‘ideology’ which needs to be dismantled. The UN Special rapporteur on violence against women, Dubravka Simonoviç, voiced her concern about this development during her opening remarks. It leaves one wondering what it takes to orchestrate this type of discourse. And where is the money coming from….? There are inidcations that the Vatican is most likely closely invloved.Despite End gender based violence across the globe

Despite  these relative set backs it is inspiring to witness the many efforts that are undertaken globally to effectively address injustices against women. The choice of the annual theme of ‘rural women’ revealed how all forms of discrimination – in education, economy, work, health, violence – are amplified for women and girls in rural areas. Again many of the panels and side events of CSW 62 addressed the issue of gender based violence. GBV runs like a thread through the programme of 2018. The launch this week of the major SPOTLIGHT  fund (UN and EU funding) to support the struggle to end gender based violence across the globe (with for now 500 million dollar) exemplifies that. Gender based violence has been acknowledged and mainstreamed so to speak, as one of the root causes and consequences of gender inequality.

This year’s focus on rural women highlights more than ever the global divide between the North and the South and the levels of poverty that disproportionately disadvantage many people in the South. It makes me count my blessings once again that my cod happened to stand in the North. One painful example of how rurality can affect women and girls safety came form rural women in India. They get up at dawn, when everyone is still asleep, to go into the fields to defecate. In that way they have the best chance of avoiding rape. Having access to a toilet could transform women’s lives marked by daily fears – and realities – of rape into a lives with  relative safety.

This year’s opening speech of Secretary general Antionio Gutierrez was refreshingly bold. “I am a proud feminist”, announcing that UN senior management has finally achieved a 50/50 gender balance. More importantly, he pointed out that attacks on rights of girls and women are often the precursors of attacks on fundamental democratic rights of all people. A crucial observation we have to take at heart given that the current political climate worldwide is marked by growing neo-conservatism, fueled not in the least by various religious fundamentalisms (notably Christian and Muslim). Women’s rights, notably abortion rights, are usually one of the first to be under siege of neo-conservatives let alone fundamentalists, all across the globe (inter alia USA, Poland, the Phillipines). Women’s rights are often the canary in the cole mine when it comes to  respect for democracy and human rights.

Fierce battles will be fought

This gender backlash is tangible at this years’ CSW more than ever. In the preceding years  the ‘unholy alliance’ of conservative forces already left its mark. Through strategic political alliances between the Vatican, and alliances of African and Islamic countries, they succeeded to retract on earlier binding statements (“agreed language”)  on women’s rights. It led in the past to a weakening of the joint annual Agreed Conclusions of CSW (the meeting’s concluding document to which all Member States are committed). In 2018 however, the conservative agenda  has already been launched by the USA, and in even more conservative terms, underlining the ongoing gender backlash. With the presentation of this week’s  country-statements Pandora’s box was opened: the USA kicked off in the negotiations with a blunt refusal to include any reference to sexual and reproductive rights in the proposed Agreed Conclusions. Fur sure this guarantees fierce debates and tough negotiations over the next week. It implies a fundamental test: will the international community allow to undermine and back track on  binding obligations that flow from – inter alia – the UN CEDAW Convention to end all forms of discrimination against women, to mention just one example.

Four days of attending a wide range of panels and side events provide lots of information. And equally important: it provides unique opportunities to strengthen institutional exchanges and rekindle friendships with colleagues from all over the world. It left me wiser, and sadder too, about the extremities in injustices that rural women and girls face. Having said that, it is also inspiring to witness women as the agents of profound transformations. More than one speaker referred to #metoo and #timesup as game changers. Social justice and gender equality seem to become less distant utopias after all. Let’s wait and see what the outcome will be of the negotiations on this year’s Agreed Conclusions. No doubt fierce battles will be fought.

The recent horrible events in Brussels have finally reached the CSW. Given the time difference, it was terrible news to wake up to.