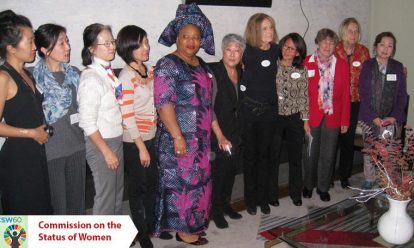 Sometimes it happens to you. What you think will be just another day turns out to be an incredible day. One hard to forget because the people you met made a lasting impression. That happened to me here in New York yesterday. I heard the stories of a couple of extremely brave women, met a Nobel Prize laureate and talked to feminist icon Gloria Steinem. As a Dutch woman I am rather no-nonsense and not easily star struck but I have to admit I was over the moon last night. These meetings made me realize once more the work we do here at the Commission on the Status of Women is of crucial importance to women like Isabel, Leymah and all other female human rights defenders.

In my first blog I told you about the recently murdered human rights and environmental activist from Honduras Berta Cáceres. She paid her life for the human rights of her people, the Lenca. The ultimate prize anyone pays. Her daughter Isabel came to the Commission on the Status of Women and spoke so eloquently and dignified about her mother and their fight she moved the entire room to tears. Isabel honoured Berta Cáceres by saying:  ‘’She was a woman and defender of life in the most holistic sense. She was killed because of her struggle for human rights, for nature. A lot of time when you defend life you win enemies. When you dream of a just world as Bertha did it is often considered a crime. The government did not protect Bertha Cáceres’  life. As it did not protect other women’s lives who have been killed. It  is not enough to punish the killers. We need to know who is behind this. Who is the intellectual perpetrator? ‘’ And she continued by asking what is going to happen to activists who are not so well known and also injured or even killed in their fights for rights. To end her speech by concluding  ‘’We as human rights defenders have to find ways to change a culture of death into a culture of life’’.  It was mind blowing that a young women, who is in mourning over the loss of her beloved mother spoke so eloquently and to the point on this subject in the international arena of the United Nations. I was in awe.

Leymah is the Liberian peace activist Leymah Gwobee who played a crucial role in ending the violent civil war in her country in 2003. A war that lasted for 14 years and was devastating to social structures in her society. Many women were abducted and abused, either physically or sexually. Women were kept as sex slaves or forced to fight in one of the many armies led by ferocious warlords. Leymah Gwobee led a women’s peace movement called Women of Liberia Mass Action for Peace. For her efforts to end the war and install free elections and a lasting peace she was awarded, along with Ellen Johnson Sirleaf and Tawakkul Karman, the 2011 Nobel Peace Prize. The committee emphasized “their non-violent struggle for the safety of women and for women’s rights to full participation in peace-building work.” Or as she says herself: ‘’Peace is not a moment it is a process.’’ Just the day before I met her I saw the Broadway play Eclipsed about the Liberian war and the hardships women had to endure. Meeting one of the key players ending this war was an amazing coincidence.

In the evening I attended  an event organized by an organization of women who marched the demarcation zone between both Korea’s. Their ultimate goal is to end the war between those two countries. This war took place in the early 1950s and it was the first military clash between  the communist and western blocks after the second world war. The fighting ended with a truce but until today no peace treaty was ever signed. So basically the war is still going on. In the early 1950s a line was drawn in the middle of the country and many families were separated. Still to this day this affects many Koreans on both sides of the border.  Christine Ahn, a Seoul born American woman had a dream. She dreamt women are the ones ending this by literally setting the first step. Inspired by five New Zealanders who drove on their motorbikes across the border, she wanted women to walk through the demarcation zone. She did the almost impossible, almost because she made it happen.  In May 2015 30 women from 30 countries walked through the demarcation zone from North to South Korea. The women were all dressed in white wearing scarfs that symbolized the unification, among them feminist icon Gloria Steinem and Nobel Prize Laureate Leymah Gwobee.  Christine Ahn quoted Gloria Steinem who had said ‘’lead with love and move with the speed of trust.’’

Antia Wiersma. She was manager Collections, Research and Advice at Atria until 1 October 2017.

The 60th session of the UN Commission on the Status of Women (CSW60) comes at a decisive moment, as the world is experiencing the biggest refugee crisis since the Second World War.